Pro-choice and anti-abortion forces have converged near Dr. LeRoy Carhart's late-term abortion clinic in Germantown, MD to kick off opposing campaigns. The anti-abortion "Summer of Mercy 2.0" effort and the pro-choice "Summer of Choice" and "Summer of Trust" efforts are taking place in Germantown this week, drawing activists from both sides of the abortion issue.

According to its website, Summer of Mercy 2.0 is an anti-abortion effort from July 30th to August 7th in Germantown. The name heralds from the first Summer of Mercy campaign in 1991, which featured protests against the late Dr. George Tiller's abortion clinic in Wichita, Kansas. Summer of Mercy's 2.0's long list of sponsors include the Archdiocese of Washington D.C. and Baltimore, Operation Rescue, 40 Days for Life, the Christian Defense Coalition, and countless other churches and organizations. The list of confirmed speakers included prominent Religious Right voices, such as Wendy Wright from Concerned Women for America, Troy Newman from Operation Rescue, Tony Perkins from the Family Research Council, Bishop Harry Jackson, Patrick Mahoney from the Christian Defense Coalition, and Michael Martelli from the Maryland Coalition for Life. (Several of these speakers gave talks at a December 6th, 2010 press conference near Dr. Carhart's clinic, which I described here.) The week-long event schedule includes prayers and demonstrations near Dr. Carhart's late-term abortion clinic, masses at local churches, and a weekend gathering in Gaithersburg that reportedly included live ultrasounds (!).

The Washington Independent reports that a July 30th gathering at Covenant Life Church in Gaithersburg, MD kicked off the Summer of Mercy 2.0. According to the article, anti-abortion organizers seek to shut down Dr. Carhart's abortion clinic and reclaim the word "choice" for the anti-abortion movement.

Local musicians have also participated in Summer of Mercy 2.0. ChristCentric, a Germantown Christian hip-hop group, performed their anti-abortion song "Fight for the Children" as part of the Summer of Mercy 2.0 efforts. (Click here if you're having trouble viewing the video.)

In response to the Summer of Mercy 2.0, pro-choice advocates have spearheaded the Summer of Choice effort to show solidarity with Dr. Carhart. Organized by Abortionclinics.org and the Abortion Access Fund, the Summer of Choice featured a charity walk which drew over 200 supporters, according to the Germantown Patch. Also participating is the Summer of Trust campaign, which is encouraging participation in the week-long pro-choice demonstrations near Dr. Carhart's clinic. The Religious Coalition for Reproductive Choice, the Feminist Majority Foundation, and the National Organization for Women have been providing nearby trainings on peaceful demonstrations. To boot, a Words of Choice theater performance took place on July 31st, while a talk entitled "Abortion, Morality, and the Liberation of Women" took place on the evening of August 1st. 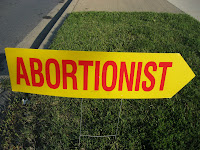 I took part in the pro-choice demonstrations on Wisteria Drive in Germantown yesterday, and the atmosphere was electric. To reach the pro-choice demonstrators, I quietly walked through a group of anti-abortion protesters lining the sidewalk near Dr. Carhart's clinic, carrying signs about the sanctity of life. Large posters with photos of fetuses lined the walk, and I saw at least one sign that read "ABORTIONIST", with an arrow pointing to Dr. Carhart's clinic.

Down the street, scores of pro-choice demonstrators held up signs with words such as "THIS CLINIC STAYS OPEN," "KEEP ABORTION LEGAL," and "DR. CARHART IS A HERO." In my conversations with pro-choice demonstrators, I learned that supporters had traveled from as far as New York, Boston, and Chicago to participate in the week-long effort. Even as temperatures rose and shade shrank, the demonstrators lost none of their enthusiasm, holding signs that earned them horn honks and thumbs-up from several passing cars.

"You're blocking traffic! MOVE ALONG!" shouted one pro-choice demonstrator, as other drivers were forced to stop behind the anti-abortion people's car. They quickly drove off without incident, and traffic flow resumed.

Despite the Summer of Mercy 2.0 website's plea that demonstrators refrain from displaying graphic signs during events, some anti-abortion protesters nevertheless brought gory signs. A pair of men hoisted several large anti-abortion signs showing bloody fetuses, directly across the street from the pro-choice demonstrations. Throughout the day, a large truck adorned with gory pictures of aborted fetuses and the words "CHOICE" repeatedly drove down Wisteria Drive. How residents of Germantown feel about these images in their community is uncertain.

The week is just getting started, and advocates from both sides of the abortion issue will be standing their ground in Germantown in the days to come. As opponents and supporters of Dr. Carhart make their voices heard this week, Germantown will stand as another reminder that reproductive rights remain a heated issue in American society.

For additional news and commentary, visit the following links.

Washington Post: Abortion is topic of dueling protests in Maryland

RH Reality Check: Summer of Choice: A Grassroots Response to Attacks on Clinics