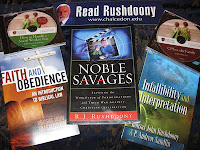 
On the evening of Tuesday, July 2nd, I observed the History of America Mega-Conference at the Radisson Hotel Harrisburg in Camp Hill, PA. The event is sponsored by Vision Forum, a ministry with a strong Christian Patriarchy slant that focuses strongly on "Biblical education" for children. The History of America Mega-Conference features workshops on the past four-hundred years of American history, filtered through a conservative Christian lens. (More here.) The description of the event at the Vision Forum website left no ambiguity about the conference's agenda.


"Are you and your children equipped to answer the politically-correct, historical revisionism that dominates higher academia and the mass media today — to defend our nation’s godly heritage with nuance and precision against the fierce onslaught of secular skepticism?

Antagonists to the Christian faith are stealing our history, and it’s time we take it back. The engaging messages given at this conference will arm your family with the truth to combat the lies of the Left — to have a sure foundation for the 21st century."

This week marks the 150th anniversary of the Battle of Gettysburg, and given the proximity of Camp Hill to Gettysburg, many attendees dressed in Civil War era costumes. The costumes, while lovely, made navigation tricky. I almost fell over a woman's enormous hoop skirt, then got accidentally whacked in the knee by a scabbard swinging from a passing man's belt. When did Religious Right events become this hazardous!? I thought.

About a dozen vendors were manning tables at the conference -- mostly books, DVDs, and homeschooling curricula -- and their titled amused me. The National Center for Family-Integrated Churches seemed keen on gender roles, judging by book titles such as Preparing Boys for Battle and Feminine By Design. At the Vision Forum merchandise table, alongside toy guns, toy swords, and books such as Large Family Logistics were DVDs with titles such as Tea with Michelle Duggar and Birth Control: How Did We Get Here?, a video on the evils of "child prevention". I chuckled at the title of a video on food culture, Food Heresies: How to Reform Our Theology of Food Without Becoming a Selfish Marxist, a Radical Environmentalist, or an Imbalanced Vegan.

The New Geneva Christian Leadership Academy table was stocked with books by Christian Reconstructionist author R. J. Rushdoony, such as the colorfully named Noble Savages: Exposing the Worldview of Pornographers and Their War Against Christian Civilization. 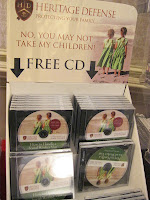 However, one display made my blood run cold. In the hotel's grand ballroom was a display from Heritage Defense that read, "NO, YOU MAY NOT TAKE MY CHILDREN!" Sitting in the display were free DVDs such as CPS vs. the Family and How to Handle a Social Worker Visit. Upon reading the flyers at the foot of the display, I realized that Heritage Defense was casting child protective services as an opponent to Christian families. On its flyer, Heritage Defense claimed that it empowers Christian families by "uncovering social services abuses" and "holding abusive social workers accountable". The flyer also celebrated the organization's efforts to protect families from the following "threats" from social services:
Suggesting that mandatory reporters and anonymous tipsters are "threats" casts child abuse reporters as troublemakers rather than responsible citizens. To boot, the branding of children who seek help from CPS as liars or "rebellious, disobedient, or indiscreet" made me shudder. When child abuse occurs in fundamentalist families, where can victims find refuge if they've been taught that CPS is monstrous and that those who report are wrongheaded? When fundamentalists witness or suspect child abuse, could rhetoric like this make them reluctant to do the right thing? CPS is by no means perfect, but it does protect children from abuse and neglect, and thus this kind of demonization benefits no one.

Opening ceremonies for the conference began at 6 p.m., and hundreds of participants streamed into the grand ballroom. As the crowd filed in, I noticed several things about the attendees. First, the gathering was overwhelmingly made up of white families. Second, practically all of the women were wearing casual dresses or skirts, which I assumed had something to do with Christian patriarchy subculture. Finally, many of the families I saw had at least three children, often more, and babies were a common sight.

To be fair, everyone I met was gentle and helpful, and the families I observed treated their children with warmth. I struggled to reconcile these kindly people with the jarring messages I would hear from workshop speakers. It wasn't just the workshop content that gave me pause -- although polemic workshop titles such as "Why 19th Century American Literature Was at War with God" and "The Rise of Religious Liberalism" left me scratching my head -- but the presenters of those workshops as well. I wondered how the women felt about a conference with only male presenters, or how anyone felt about a conference with all white presenters.